When an American company wanted to introduce the concept of air-intake screens for building-services plant to the UK, Ken Sharpe was invited to join an audience of consultants and contractors. For those of you who weren’t there…

It’s conventional wisdom that you should not install any kind of screen across the air intakes of plant such as air-handling units, chillers, dry air coolers, air-conditioning units and cooling towers. The logic is that debris in the air will quickly clog whatever is used as an air-intake screen, so the equipment will use more energy or, even, stop working.

Randy Simmons, founder Air Solution Company in the USA, didn’t know that you weren’t supposed to block air intakes when he was called in to tackle the problem of airborne ‘fuzz’ from cottonwood trees blocking a process crossflow cooling tower, causing it to be shut down four times a year and interrupting production.

He put a mesh across the air intake. It worked — but not for long. After just a few days the screen had accumulated so much debris that there was a loss of static pressure and the screen needed cleaning.

Not deterred he tried a hundred commercially available screening products with air speeds from 100 to 1000 ft/min — being an American. That is approximately 0.5 to 5 m/s. He found that lots of screens gave adequate airflow but inadequate filtration. Equally, he found that other screens achieved good filtration, but at the expense of airflow.

Keeping debris away from the inner workings of a cooling tower brings operational and maintenance benefits.

Still undeterred he set out to work with a technical firm and a fabric company to develop a screen with both adequate airflow and adequate filtration. The resulting successful product is based on a polyester material coated with non-stick vinyl. The non-stick properties reduce resistance to airflow and help to prevent debris sticking to the screen. Also helping to prevent debris snagging to the screen is the bonding of the horizontal and vertical fibres at every crossing point. With an air velocity of 2 m/s, these air-intake screens have a pressure drop of around 10 Pa.

These filters will inevitably trap debris. That is what they are designed to do. But they are much easier to clean than what is being protected — such as a heat-exchange coil with its array of closely spaced fins. All that is needed is sweeping off with a broom, a job that takes just a few minutes. Other methods of removing debris from these screens includes a vacuum cleaner or hosepipe.

Experience with these air intake screens has shown a host of other benefits with a wide range of HVAC and process plant. And those benefits can readily be provided to existing plant by retrofitting screens that have been made-to-measure.

Some of the benefits arise from these screens preventing airborne debris clogging the fins of internal coils, air filters, and other components such as the fill packs in cooling towers. Such clogging of components means that more energy has to be used to draw in the required airflow and increases the risk of breakdowns and downtime.

Other benefits arise from the airflow becoming more laminar. Better use is made of the full area of a heat-exchanger. In a cooling tower, there is also a similar improvement in the performance of the fill packing a cooling tower. So not only is the maintenance requirement reduced, but the cooling tower also uses less energy.

Air filters benefit, too, with an extension of filter life by up to 60%. 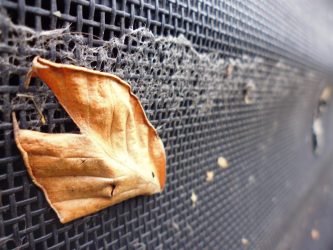 Imagine how this kind of debris could clog coils and filters in building-services plant.

These air intake screens are widely used in the USA but have only relatively recently reached the UK market through a company called Ecex in Thatcham, Berkshire.

A variety of projects in the UK demonstrate the benefits of air-intake filters.

For example, the payback from the energy saved can be quite quick. A project at a London University reduced energy consumption by 7%, representing a payback of about 18 months.

Another project for the BBC’s Broadcasting House in London involved these air-intake screens being installed across the intakes of air-handling units. The BBC’s engineering-services manager comments, “The installation has been extremely successful. The great improvement in filter and plant cleanliness has also given a noticeable boost to some areas of the building where air quality had previously been an issue.”

Without air-intake screens the filters in an AHU would have more work to do, and Randy Simmons suggest that the screens can extend filter life by up to 60%.

Another project for a major laboratory in the UK used the screens to protect the heat-rejection coils of an air-cooled chiller. The main benefit here was the capture of debris so that it did not reach the coils. The screens are easy to clean, reducing the time and cost of maintenance.

Perhaps it is time for a change in the conventional wisdom that air intakes should not be ‘obstructed’ in any way.